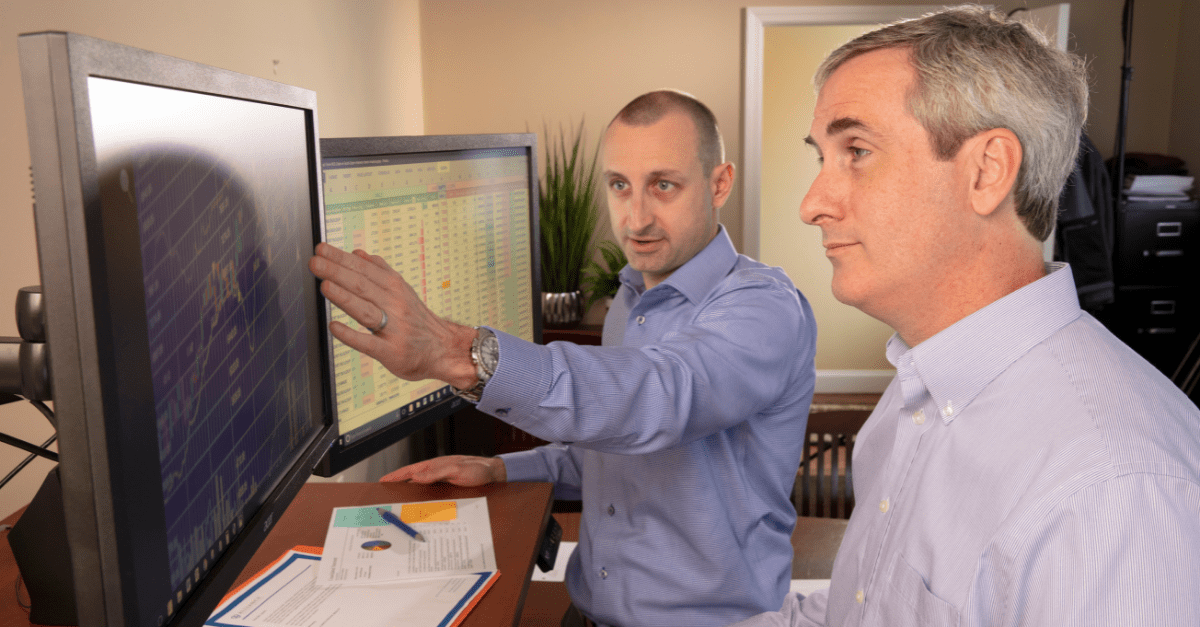 If 2020 were all about the pandemic, 2021 should be about the recovery. After the first three months of the year, it is widely expected that the economic data will follow the improving medical news. The Atlanta Federal Reserve Bank’s economic growth predictor is currently forecasting 6% growth in gross domestic product for the first quarter – and this does not include the recently passed fiscal stimulus. Economists have updated their assumptions and now are projecting as much as 8% economic growth for the year with all the stimulus baked in. And, there could be even more support with a substantial infrastructure bill in the works. [1][2]

We have not seen this level of economic growth since 1984. Back then, interest rates were on the decline and the country was healing from a double-dip recession and a multi-year bout with serious inflation. A famous political ad at the time used the phrase “morning in America” to describe the economic recovery that was underway. The economy grew by 7% that year but has seen nowhere near that level of growth since that time. In fact, since the 2007-2009 financial crisis, the economy has been somewhat underwhelming and has not grown by the coveted 3% in any one calendar year despite record-low unemployment and lower tax rates. [3]

If all goes according to projections, this should change in 2021. Massive stimulus and fiscal support combined with cash stockpiles and pent-up demand from consumers and businesses are expected to drive economic growth and corporate earnings to levels not seen in nearly 40 years. Of course, this all depends on the continued vaccine rollouts and favorable virus trends. At the beginning of the quarter, hardly anyone was vaccinated, and daily virus case counts were at record levels in the U.S. However, by the end of the quarter, over 40% of U.S. adults had received at least one vaccine shot and nearly 25% were fully vaccinated. The fact that 75% of seniors have received at least one shot has driven down hospitalizations and deaths. And, with a 7-day average of 3.1 million shots per day, it would appear that we should return to “normal” very shortly, although the pausing of the 1-shot Johnson and Johnson vaccine could push back the timeline slightly. [4]

During the first quarter, the S&P 500 index returned 6.1% and the international MSCI EAFE Index returned 3.4%. Volatility remained mostly in check. But, it was the changes beneath the surface that amounted to the biggest developments. The cyclicals rally that began in the fall extended through the first quarter. As discussed in the last market update, cyclical companies, such as energy companies, banks, and industrials rely heavily on an expanding economy to optimize profitability. These stocks, including smaller companies, became extremely beaten down during the pandemic and have surged in recent months. US Small companies, defined by the Russell 2000, were up 12.7% during the quarter, while energy companies, banks, and industrials returned 30.8%, 16.0%, and 11.5%. The pandemic winners of 2020, such as technology companies that can make record profits in a recession, have mostly moved sideways or declined since August. [4]

This divergence in performance is a function of multiple factors. First, the valuation for cyclical became too cheap and compelling. Second, the expectation is for cyclical earnings to expand substantially post-pandemic in an economic recovery. Third, rising interest rates are a headwind for stocks, but more so for growth stocks due to how most investors analyze and value these stocks. In fact, rising interest rates can actually be beneficial to some cyclical companies, such as banks, which often operate with increased profitability in higher rate environments.

Most types of bonds had the unusual result of declining in value during the first quarter due to rising interest rates. The Federal Reserve has anchored short-term rates close to zero, but longer-term rates are market-driven and have increased due to expectations for accelerated economic growth. Bonds are a self-correcting asset class and rising rates can be a double-edged sword. As rates increase, currently issued bonds generally lose value since most investors would rather hold bonds with higher yields. However, when rates are moving higher, bonds that have yet to be issued will generally have higher yields upon issuance – leading to higher future total returns.

The widely followed Bloomberg Barclays U.S. Aggregate Bond Index lost 3.3% in the first quarter. This index is known for holding high-quality bonds with intermediate-term maturities. Shorter-term bonds tend to perform better in rising interest rate environments. Also, riskier bonds known as “high yield” bonds performed better due to fiscal stimulus and the prevailing thought that the economy will be improving. One relative bright spot was municipal bonds, which held relatively steady due to expectations for higher taxes and greater investor demand.

An Inflation Head-Fake Could Cause a Stir

Inflation expectations are mixed. Calls for inflation since the financial crisis due to easy global monetary policy have not come to fruition. Deflationary forces of globalization and technology have countered any chance for rising prices in recent decades. Perhaps a U.S. economy that runs hot will end up being the missing ingredient that pokes the bear just enough.

Inflation, as measured by the Consumer Price Index, increased to 1.7% in February, the highest rate since a year ago and prior to the pandemic. It is likely that we see a further bump in the next couple of months – partially due to higher commodity prices and partially due to lower base case comparisons from one year ago. Supply chain bottlenecks in some sectors would add further fuel. This bump should be temporary, but this bears watching. [5]

A manageable level of inflation should be expected by investors. Anything more than that, or if sensationalized too much, could lead to bouts of volatility. There is likely more slack in the economy than most think, with a low labor participation rate from millions out of work.

The strategy continues to be overweight equities since systematically buying the dip in March 2020. The equity overweight is partially a reflection of the low expected return that bond portfolios could generate in the near term, but also a belief that the economy and corporate earnings will expand based on improving medical news and headlines. Within equities, the portfolio emphasizes cyclical companies and smaller companies, which we feel could continue to benefit from an economic recovery. International exposure remains neutral at between 25% and 30% of total equity exposure, although this depends specifically on the total portfolio risk level.

Interest rates may continue to rise throughout the year if the economy continues to recover. This could provide a better entry point for bonds when the time is right to reduce equity exposure. The diversification benefit of bonds within investment portfolios should be greater in a higher interest rate environment.

In keeping with the themes of the overall market, holdings in cyclical companies rallied, while shares in most technology companies went sideways or declined. The strategy continues to be overweight banks, energy, and industrials with an emphasis on package delivery companies, while underweight technology, with modest exposure to China. Overseas markets can be more volatile, but our focus is on buying companies that create value over time and are trading at a discount to intrinsic value.

There were changes made in the quarter in most portfolios, though individual accounts may vary. In late January, we added a couple of small positions in targeted ETFs. The first is the S&P Software & Services ETF (XSD), which is an equal-weighted index of US companies in that space. Since it is equal-weighted, the holdings are skewed towards smaller companies. The second is the Global X FinTech ETF (FINX), which is a diversified portfolio of financial technology companies, which is an emerging industry. We believe these holdings give us targeted exposure to specific areas of the market that exhibit growth as well as to companies with smaller market capitalizations.

In early March, we added to holdings in T-Mobile (TMUS) and Alibaba (BABA) on weakness, while initiating a position in CVS Health (CVS). These additions were partially funded with a trim of Federal Express (FDX). T-Mobile is now the second-largest telecommunications company in the US and we think it is poised to realize significant synergies from its merger with Sprint. Alibaba is the biggest e-commerce company in the world, and the stock weakened amid disagreements with the government over the fate of their financial subsidiary. CVS Health includes CVS Pharmacy and Aetna, and we believe it was trading at an unusually low valuation. We reduced our weighting in Federal Express, as the stock had become too large of a position. However, we still like the company and continue to hold it. [TP1]

On balance, we lowered the cash levels within the strategy since clients participate in other strategies with cash and more conservative bonds that offset equity risk. Therefore, we concluded that it was not necessary to hold excess cash in most Focused Equity accounts, though that varies depending on client wishes and needs.

The Data Will Start to Matter Eventually

The economic recovery should continue to follow the improving public health trends. We are racing toward herd immunity for this virus when factoring in those that have already had the virus with those that are getting vaccinated. There are risks that vaccinations are slower in certain regions and countries, which could cause variants to emerge and the virus to hang around longer. But, trends are favorable at this time that we should be able to return to some semblance of normal – perhaps sooner than some expect.

At that point, the economic data and earnings will take center stage. The March jobs report was impressive, but future reports must build on this strength. Consumer confidence must improve. Many say they are sick of eating their own cooking and look forward to eating out and possibly traveling, but investors will need to see it. And, we believe that they will start to see it in the second and third quarters. Much of this has been priced into equities, so we are not expecting substantially more upside in the coming months, but there is always the chance for an upside surprise.

[4] Returns generated from Morningstar and Factset